I realise the reservation ‘gods’ have dealt me a dubious hand within five minutes of coming aboard the 11.03 to Edinburgh Waverley. That is all the time it takes for me to spot the trio of old geezers parked in the pair of seats immediately to my right and be swarmed by the posse of loud, giggling women who breeze past on their way to the seats they have reserved a few seats behind me. Between them, they kick up a racket whilst the train loads up, from which I overhear that the men are offshore workers returning home – somewhere beyond Edinburgh – after three weeks offshore, and the women are headed to Edinburgh for a hen do.

Across from me, separated by the table I was so keen to get for my laptop, a lone man sits, head phones in, reading a book, a cup of Costa coffee at his side from which he swigs intermittently – between looking quizzically at the developing ruckus and peering into his book. I nod a greeting when I catch his eye and move the bags in the overhead locker to create space for my knapsack from which I extract my laptop and settle in to my seat.

By the time the train begins to roll towards the next stop, Stonehaven, things have quietened down a little, not before the (seemingly) oldest of the trio has offered one of the ladies a swig from his bottle of whisky. She demurs, insisting that 11.15am is a early, even for her, to kick off on whisky. She does drop herself into the seat next to the men for a quick natter – they talk about the football game which Aberdeen apparently won 5-2 on aggregate and she points out the bride to be – the wee lassie with red hair – is how she describes her, pointing.

I keep my gaze fully focused on my laptop screen – a good way to avoid unnecessary conversation I think, given these seem a particularly boisterous lot – and make a few updates to the spreadsheet I had been tinkering with before I left work, only glancing up when a blast of sunshine hits just past Montrose. The view is breathtaking – cliffs, beaches and lush greenery – one of the reasons why train journeys are my preferred mode of getting about in Scotland – and I inwardly congratulate myself on having chosen to take a forward facing, window side seat.

That ruse is not enough to save me from all contact – in the 2 and a quarter hours between Stonehaven and Edinburgh Waverley, I get called brother by the most gregarious of the bunch, get asked what I’m doing on my laptop, get offered a swig of whisky three times and get my head rubbed by him, all far too chummy and matey than I care for – but given the close quarters and the fact that we are cooped together for all that time for better or worse, I shrug it off, choosing to continue with what I am doing than make a big fuss.

Once through the barriers at Edinburgh Waverley, and into the bright sunshine that bathes the surroundings at Edinburgh’s Waverley station, that sense of returning recognition hits me. The last time I was here it was 2012, M was interviewing for a role up in Aberdeen at the time and had been on the phone a lot with me for insights into the personality of the hiring manager and tips to handle the interview. I had slightly more romantic interests. She got the job, my interests – misguided in retrospect –  didn’t quite pan out, to my lingering regret. All that comes rushing back to my mind as I navigate the steps from the station onto Princes Street and on to the test centre where my result sheet is to be amended, the main reason for this trip. That takes all of twenty minutes to complete, leaving me with a load of time on my hands and not even planned to do. I end up at Starbucks, with a large latte and carrot cake to clear my head, charge up my phone and plot my next move.
—

It turns out I’m in luck, it is the final weekend of the Edinburgh Jazz and Blues Festival. Crucially also, one of the Friday night sessions holds at The Jazz Bar which is a few hundred feet from the hostel I have booked for my overnight stay, as is a Nandos and a Tesco between which toiletries and dinner are sorted rather quickly.

The line at the Jazz bar when I arrive at a quarter to eight for an 8pm start is lengthening rapidly. Those who have been smart enough to pre purchase tickets are waved through whilst the rest of us who have left things till late wait to be ushered in in batches of five for standing room only. The band for the day – a Thelonious Monk tribute act of sorts – starts off slow, but eventually get the evening off with a passable if pleasing performance. In the end I enjoy it enough to make a mental note to drag one of my friends to the Blue Lamp when I return home. 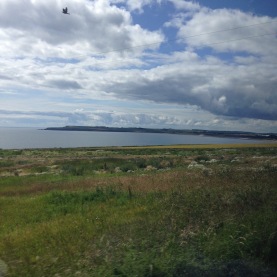 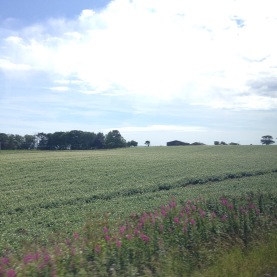 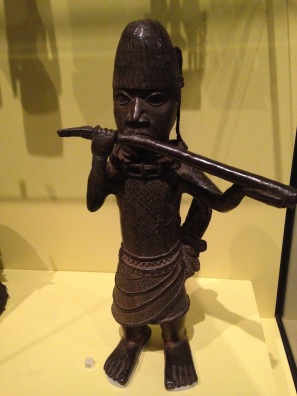 I return and promptly fall asleep till woken up by the shrill shriek of the fire alarm at 3.00am. We never quite know what precipitated it but the fire service shows up in full fire fighting mode. An hour later with no real action taken – visible to me at least – we get the all clear and are ushered back in to the building. I fail to fall asleep so I read instead, taking the opportunity to catch up on the book I currently have on the go, the Cheryl Strayed edited The Best American Essays 2013. I find Marcia Aldrich’s The Art of Being Born, Walter Kirn’s Confessions of An Ex-Mormon and William Kelley’s Breeds of America particularly engaging.

Fully awake at 10.0am and checked out of my hostel, I have a wander about Chambers Street, finally settling on a tour of the National Museum of Scotland. Whilst waiting for the start of the free guided tour I have elected to partake in, I fall into conversation with a duo of girls from Spain (where it is apparently 40 degrees C that morning), an old couple from Texas, a father and son from Canada and someone from Alaska. When the tour guide hands out maps, she asks if I’m ok with an English one (there are other languages, apparently). I want to ask her if she’s got one in Yoruba for the heck of it but hold my tongue. That I have my jacket on in 18 degree weather probably has deceived her into thinking I am not from these parts.

The tour is an instructive one, I end up returning to the Millennium Clock, browsing the natural sciences section and coming up close to a stuffed African Elephant and end up in the World Cultures section where I’m particularly intrigued to see a commemorative Oba’s head. That the object sits in a Scottish Museum rather than in its rightful place in an altar in the Oba’s Palace is one of those artefacts of history I suppose – bitter sweet because its being here has probably allowed me see it, and means it will be better preserved than if it was in a Nigerian museum. Stolen goods then or taken for the greater good?

After the museum, there is just enough time to grab a bite at F&B and catch my train for the return trip home. Again the Waverley station is bathed in bright sunlight as I walk back in. Outside, the weather progressively gets worse – as stark a contrast to my outbound one as there could be. I arrive just past 5.30pm, to life and reality, the mist, settling in as we go past Montrose has become a thick, dense fog, like a noose around the sun’s neck that the passage of time as we speed along towards Aberdeen has drawn tighter till it has been extinguished.

Some things are what they are – chief of which is that I am reluctantly coming to accept that for consistently non-grey weather, one must look further south.

One thought on “The Weekend Diary – Of Trains and Stolen Things”