The greatest enemy of hunger for God is not poison but apple pie. It is not the banquet of the wicked that dulls our appetite for heaven, but endless nibbling at the table of the world. It is not the X-rated video, but the prime-time dribble of triviality we drink in every night. For all the ill that Satan can do, when God describes what keeps us from the banquet table of his love, it is a piece of land, a yoke of oxen, and a wife (Luke 4:18–20).

From John Piper‘s seminal book, A Hunger for God. For the third day of this challenge for which Mrs T nominated me (thanks Sis!).

Mrs T, she of the keen mind and boundless energy,  nominated me for the 3 day quote challenge, the key requirements being:

PS. As I am no longer as personally connected to tons of bloggers as I used to be, I’ve opted to fulfil items 1 & 2 only. 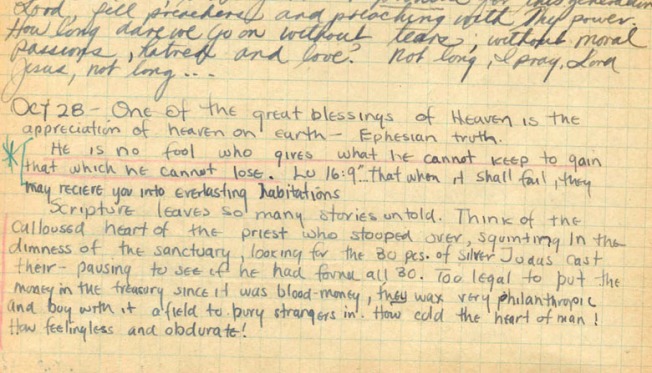 He is no fool who gives what he cannot keep to gain that which he cannot lose.

My first encounter with this quote from Jim Elliot’s diary is lost to the blurred edges of memory but if I were to hazard a guess it would have had to be at one of the myriad youth camps and Sunday schools I was dragged along to in my teens. Jim Elliot’s story is a fascinating  if morbid one, of martyrdom, forgiveness and building an enduring legacy, things which matter in the long run.

It has been aeons since I was tagged.  Apparently Esco thinks we are stylish and versatile as does Jaycee… Versatile? Maybe.. Stylish? Definitely not.. Just ask the girlfriend… So here goes…

First off a big shout out to all the peeps I met with or spoke with during my trip to Nigeria – Doug, PoeticallyTinted and Naughty Eyes. You peeps made the calisthenics of moving around Lagos less torturous.. Dante, I dey vex big time.. We go ruff things when next I enter LasGidi.. Mscheeew.. Hmmm.. Belated birthday wishes too to Funms of the paused journey…..No do anyhow o!!!!

Thankfully, you peeps didn’t ask me any really hard questions, so here are the answers..You’ll not get under DB’s skin ever again.. So savor the moment.. LOL

There were a number of age related queries from Nefertiti, ReadyDee and Original Mgbeke. In all my many years on earth I have yet to meet a young lady who answered directly a question on her age. Are there different rules for guys and girls on this one? Anyways,  I will answer with a riddle, and a fact that you can google to come up with the answer.. Or maybe at the very end I will oblige.. We’ll see.

I’ve lived in four decades, but I’m not 40…….Was old enough to remember Maradona scoring the hand of god goal against England at the Mexico ’86 World Cup. Plus I  was born 2 days before two Aeroflot planes collided over Ukraine, killing 156 people.

Gee had a bunch of questions, but since she only seriously asked one, one it is. Why did I start blogging? Back in ’06 I needed to deal with a whole lot of hurt. I talked about it in my the truth about Di post. I talked to a friend, who advised I journalled, I googled journalling and found out I could do it online via a blog, and I started my old blog-city blog. Eventually started off a blogger blog in 2007 and the rest as they say is history

Aloted had a question about my teenage years, peer pressure and if I survived it, as well as wanting some words of advice for the younger dudes. I managed to survive as a teenager, but I capitulated big time as a young adult.  My rep preceeded me to University, plus my folks were pretty well known across the state in the Christian student community, so fellowship ‘big boys’ were lining up to take me under their wings. I also got involved in my fellowship pretty quickly, so the visibility kind of helped keep things in check. Had friends – but most of them were chaps who were born and bred right but who had slipped along the way, so they realized the importance of what I had. Aside of the odd occasion, peer pressure was non-existent for me.

Got my dream job at 23, away from everyone who knew me and my past and a sense of adventure kicked in.  Still didn’t smoke and drink but when the occasional opportunity to get intimate came up I jumped at it.

Three things I would recommend to a young man

Bumight was curious about the source of the theOOhj moniker and wanted me to describe her in 50 words. Well, Nothing sublime here. I played every incarnation of Football/Championship Manager since 2001. I used to start off in Italy, and I needed an Italian name to fit my persona. theOOhj jumped to mind – sounded Italian, I added Danny cos it sounded nice alongside theOOhj and it sounded a whole lot like my real life nickname from back in the day.. Found out eventually that it’s a region in Italy, so it might have come one of them romantic novels  I read as a kid. I  dunno. The description – when I get my muse to hammer out an acrostic, I’ll deliver.

Naughty Eyes had a slew of questions

Ready Dee also had a slew of questions.

An anonymous e-mailer, Buttercup and Original Mgebeke wanted to know what other characteristics Mrs DB needed aside of the well documented Akara making prowess…

Anonymous e-mailer had a number of other questions

Original Mgbeke had a few other questions

ButterCup had a few questions too..

Its almost 2am and I can’t sleep… Some dude got me mightily worked up this evening and my vexation almost  knew no bounds.. That prompted me to spew my shortlived rant, which I’ve thankfully deleted.  Sowwrry for over exciting you over nothing. I’m over it now anyways…Since I am awake, I might as well do these memes that have been hanging over my head for a whiles now.. First off Naijababe tagged me in February and then both Tigress and Poeticallytinted tagged me with the honest scrap award fairly recently. Since Naijababe’s list is lonnger than 10 items, i will take that as a neccesary and sufficient condition to claim the honesty award! Here goes…

I have unilaterally decided not to tag anyone.. Cos all these memes are sthng else! Errr… the first seven people to read are tagged!

Where’s ur cell phone? – On my table
Where’s ur significant other? – Dunno? Missing? Still looking – Take yr pick!
Your hair colour? – Kwashiokor brown from eating too much sphagetti and too little beans!
Your mother? – Asleep of course!
Your father? -Ditto
Your favorite things:  My HTC TYTN II
Your dream last night? Too serious to dream
Your dream goal? Pipeline Technical Authority at an oil major by 2015
The room you’re in? The absurdly tiny campus room that costs more than my my entire house in 9ja. Mscheeew
Your hobby? Football Manager on my lappie, Shakespeare and stalking blogs
Where u wanna be in six years? Houston, Texas or Calgary, Alberta
Where were you last night? In my bed of course!
What you’re not? Snobbish
One of your wish list items: A certified akara maker!
Where you grew up? Somewhere in the jungles of the NigerDelta
Last thing you did? : Send an email
What are you wearing? –Errr u don’t want to know.. Trust me..
Your pet: None.
Your computer? Dell Inspirion D620
Your mood: Sober, Slightly pensive
Your car? Sold
Something you’re not wearing? A facecap
Favorite store? Primark — Cheap I know.. but functional…
Your summer? Dunno
Love someone? I think so…
Your favorite colour? Sky blue — of the Manchester City football club home strip ilk and Red – YNWA
Last time you laughed? Over lunch
Last time you cried? 12 March 2009, before then sometime in 2003
Are you a bitch? Obviously doesn’t apply
Favorite pastime: Shakespeare + a tall glass of milk + a pack of tortilla chips – heavenly
Hater or lover: Depends on the context
Genuine or fake: Genuine — Typically
Any vices? – Caring too much abt peoples feeling to my own detriment sometimes
Pro life or wire hanger: Depends on the context!
Mccain or Obama: Err.. any of them on the PDP platform?
Pro-plastic or natural: Dunno.. Update (due to popular demand) ne pas être dans de nombreuses situations où j’ai eu à choisir
Dream job? Chilling on my yatch somewhere in the Carribean

As I have already done the 25 things and the 2 truths 1  lie memes I’ll just leave it at that….