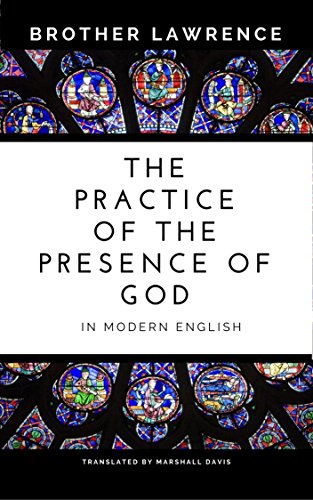 A classic which dates back to the late 1600s, this is a book that regularly makes it on to lists of great devotional books. This (newish) translation is by Marshall Davis, who has form for this sort of reimagining. Between this year being my year of delving deeper and plenty of time thanks to COVID-19, I finally got round to reading this!  to read has ended up on my pile for years. The central characters are a French lay brother, born Nicholas Herman but better known as Brother Lawrence, and Father Joseph de Beaufort, the vicar general to the Archbishop of Paris. A perhaps unlikely friendship given their different stations in life, we have it to thank for the letters and conversations recorded here.

A key theme is developing a practice for the presence of God in one’s life, through the mundane and the spiritual, particularly apt given Brother Lawrence served in the kitchen of the Order of Discalced Carmelites. The difficulties of going from normal life to a state of authentic union are not shirked. Rather, several times in the book Brother Lawrence refers to the need for ‘faithfulness in the dry seasons of the spiritual life’, ‘make[ing] a special effort’ and using the will to constrain wandering thoughts.

The path described here is not merely hard, disciplined work though, a love for God, instigated by Him, must be the reason why we go through the process and practice so that ‘after a little care we should find His love inwardly excite us to it without any difficulty’. Elsewhere, ‘All kinds of spiritual disciplines, if they are void of God cannot remove a single sin from our lives.’

The spiritual life is neither an art nor a science. To arrive at union with God all one needs is a heart resolutely determined to apply itself to nothing but Him, do nothing but for His sake, and to love Him only

Certainly one to come back to again and again.
Rating 5/5

Join 459 other followers
Follow A Geek's Life on WordPress.com