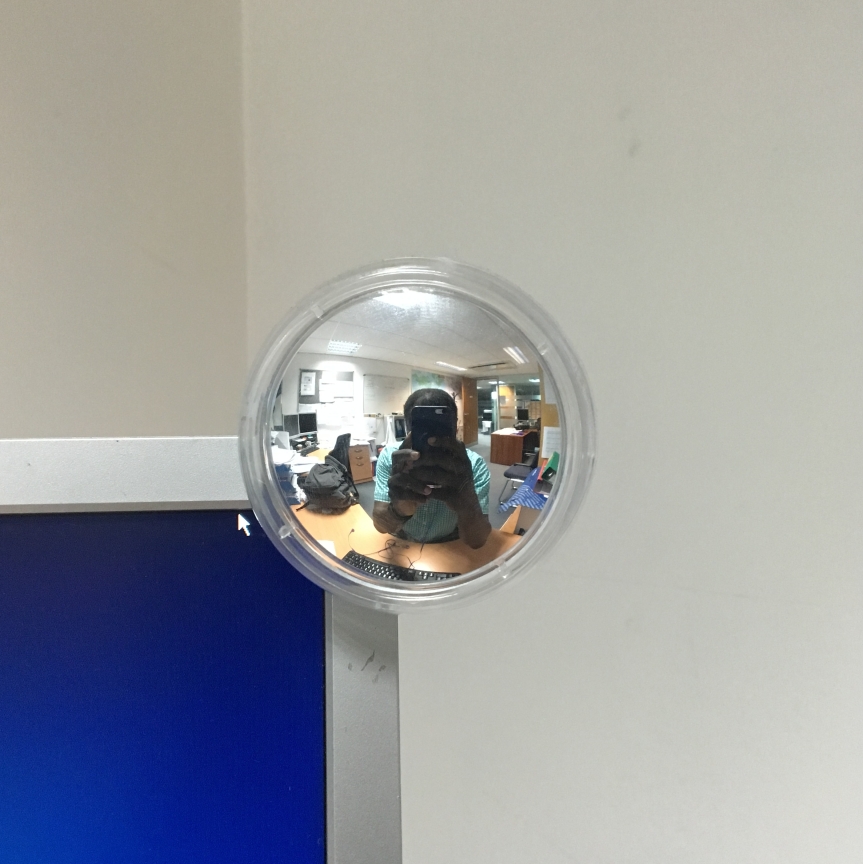 Sometime ago, not without some misgivings I must add, I moved desks at work, all part of the new re-stacking policy designed around optimising our use of space. Following the move, I went from a desk which looked on into the central corridor with my computer facing away from the door to one where my view was the bus station across the road. The view was decidedly an upgrade, what came with it though was a sense of being blinded to people milling about behind me and coming in to meet me, particularly on the occasions when I have my head phones plugged in to maximise my concentration.

Enter the weirdest – but most useful gift  – I’ve ever been given; a mirror which stuck to the top of my monitor resolves the blind spot around the things behind me. Given to me by the previous occupant of my desk, it now means I have the best of both worlds, a decent view and a significantly lower risk of being blindsided by people door stepping me from behind. Bliss.

S and I share an inside joke from time to time, centred around ageing – gracefully or otherwise,  depending on which of us the joke is on. Things like falling asleep in the middle of a conversation, emoji related faux pas, or particularly weird and wonderful auto correct generated communication mishaps bring the joke up; mostly at my expense given my penchant for WhatsApp typos. The latest instalment of this long running joke was precipitated by a typo in a long string of text I sent, Dear somehow becoming Deer. To her credit she waited all day till the evening to point it out, the conversation which ensued  taking a different tenor, one which went down the lines of pondering the etymology of names lovebirds call themselves rather than focusing on my latest foible.

It is an interesting subject, I think, given what the range of the literal meanings  to the ones I pick up from conversations around friends and their significant others can be: defenceless objects which need protection (baby, doll?), unhealthy sweet things (honey, sugar, candy?) and objects of worth (gold, diamond, precious).

In the end, I dig myself out of that hole by referring S to the Songs of Solomon; that provides validation of deer, and the parts thereof as a metaphor for love. 🙂

They board at West Silvertown, they being a little girl and someone I assume must be her older brother. She is dressed in what looks like her school uniform, and has a bright pink backpack with some child super hero of some description on it. He on the other hand has huge beats headphones on, and an iPhone in his hand, clearly listening to something. Once aboard and settled in – it is standing room only – she tries to peer into whatever it is on his phone, an act he prevents by moving his phone outside her reach. That attempt at playful, sibling bonding on her part, and an insistent aloofness on his part is a pattern that repeats itself as we chug along towards Ilford where we all disembark. My tired, cynical mind – work, a flight up from the ‘Deen to London City and then this train ride have taken their toll – goes to work analysing the situation, the conclusion being that he has been tasked with getting his little sister home, a task he considers an intrusion on his own plans and space. Not quite content with that, she being the energetic, doting little sister wants his attention but his phone and whoever is on the other end are more important in the moment.

With time, I suspect that he will learn that family trumps the heady heights of young love, and that in ten, fifteen or twenty years time she will still be kicking about in his life, the person on the other end, most likely not.

2 thoughts on “About Town: Weird gifts, names and Children on Trains”