Two weeks ago on a whim, I decided I would book a short trip away from the ‘Deen, to London. The plan was simple — fly out on Friday night after work, catch up with a few friends, particularly S, and then head back on Sunday night, with no one the wiser at work. At such short notice, British Airways to Heathrow was a non-starter, as was Flybe to London City. This left EasyJet to Luton or Gatwick as the only viable options. In the end, I settled for Luton, the weekend of the 10th of June being the best fit with friends and family. On the day, having packed my go to travel bag and done work, I hopped on to the 727 from the bus station next to work, arriving just past 6.00pm for what was meant to be a 7.35pm flight.

The first sign of trouble was the continued absence of a boarding gate on the departures display against my flight. The details blur in my mind but I suspect it wasn’t until after 8.00pm that a gate was displayed- gate 1. Between then and 9.30pm when I left the airport, we managed to get in line for boarding before being stood down and then get asked to return to the front desk for further information. A ‘recovery’ flight was announced, departing at 9.00am the next morning- key because anything later than noon would have made the trip no longer worthwhile for me.

Fortunately or unfortunately, the flight the next day was also delayed, eventually leaving at 10.46am. S, thankfully, had re-jigged her plans to accommodate the delays, otherwise I might have been in a spot of bother.

The mood overall wasn’t particularly great, a couple of people seemed to have been affected multiple times in the recent past by similar events as these

Once in London, I briefly flirted with the idea of booking a quick return via BA. I however convinced myself that the bother with the inbound flight was a one off. Surely thunder couldn’t strike twice. My faith would prove misplaced, in even more spectacular fashion than the in bound flight.

Arriving at the airport just before 6.30pm, I managed to get through security in six or so minutes, not shabby given how things have panned out differently in the past. A long wait ensued, punctuated with a call to proceed to Gate 10 at about 9.30pm. Whilst waiting at Gate 10, it turned out the air craft we were meant to fly on had arrived but not one of the ground staff seemed to know its whereabouts. A further call to go to Gate 2 raised hopes briefly, before we were stood down at about 10.20pm with reports of the flight being cancelled and a request to return to the front desk.

All outward EasyJet flights from Luton were cancelled that night — Aberdeen, Belfast, Berlin and Glasgow all getting the chop. That led predictably to bedlam, worsened by the lack of relevant information flowing. There must have been 300+ people thronging the EasyJet customer service desk at departures, waiting to be advised of new flight details and hotel accommodation (in the end the advise was to book one off the mobile app and keep the receipts to be reimbursed afterwards). Amongst the mix, I spotted a number of fellow travellers on the cancelled and then recovered in bound flight from Aberdeen.

All told, it took me till 1.20am to get my cancelled flight rescheduled to a Glasgow one (as there was no Aberdeen flight till Tuesday) and a hotel sorted.

Predictably, the flight the next morning was also delayed; from 10.55am to 12.15am which meant I had to miss work as well as hop on a bus at 2.10pm, only arriving in Aberdeen at 5.00pm; almost 24 hours after I should have.

I suppose EasyJet and Luton airport cannot legislate for the impact of acts beyond their control. It turned out the Aberdeen to Luton flight was delayed due to a damaged nose tire which needed replacing, whilst the Luton to Aberdeen leg was cancelled due to the knock on effect of Gatwick flights being diverted to Luton following runway closures.

A few things could have been handled much better to ease the impact on stranded and confused travellers such as me and avoid the comedy of errors which ensued:

Perhaps these are the compromises we make when we go for no frills, budget flights, ones in which the schedules and timelines are so finely tuned that all it takes is one anomaly to unravel everything. On the basis of this weekend’s debacle and what is bound to be a slew of demands for compensation from EasyJet, it seems to me that their scheduling model projects a false economy. It is also a false economy for me too as a traveller; missing a day of work, the stress and strain I went through to sort out the journey and get home surely have costs, monetary or not.

It is difficult to think of any scenarios in which I’ll fly EasyJet again, or through Luton for that matter. I just like the certainty of knowing I’ll arrive on time, given my usually tight schedules.

It wasn’t all doom and gloom. S was an absolute delight to hang out with as always; her sharp, sarcastic tongue, allied to her controlled excitement the highlight of what would have been an otherwise ruined weekend.

Something about shared adversity sometimes brings out the best in us. Watching people rally around each to help with crying, antsy babies, managing to have civil conversations and staying in line for the main part gave me renewed faith in humanity.

Politicians and the weather get people talking in good old Blighty. Waiting in line on Monday morning whilst the shenanigans around my Glasgow flight unfolded, I ended up in conversation with a gentleman on his way back home. His distaste for the SNP and their particular brand of lip service and blame shifting resonated with me as did his views on the Brexit referendum. I still haven’t made up my mind on that one. Not much time left on that one.

Credit too must go to the staff who manned the customer care desk at Luton into the small hours of the morning, until we stranded customers had gotten rearranged flights. 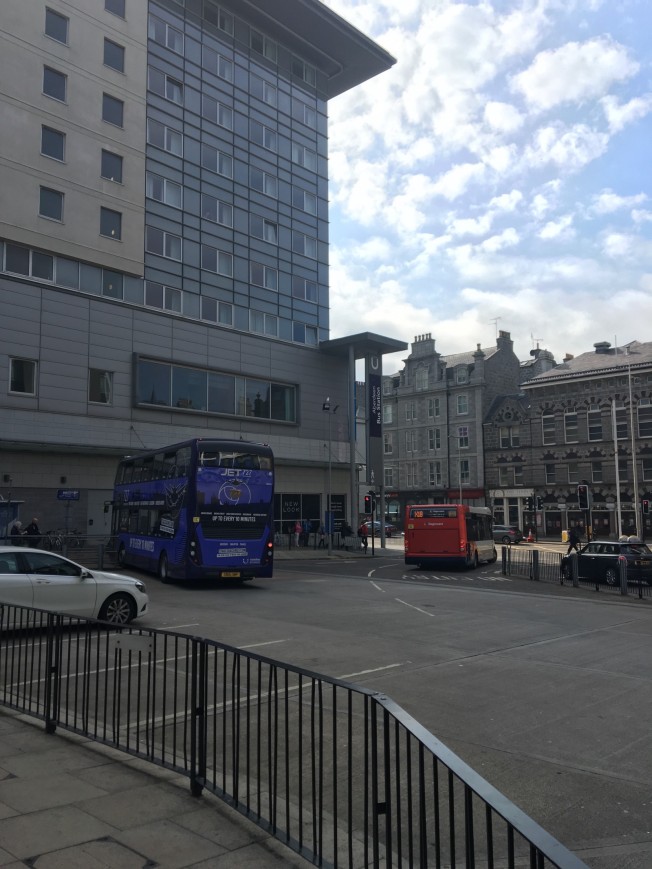 As my bus made the final approach into the bus station, my relief at finally making it home was unquantifiable. Never did the sight of Union Square feel so welcome to me as it did that Monday.

E may be for EasyJet, in this case it definitely stands for error-strewn and perhaps excruciating..