Aperitivo, on Bon-Accord Street, is where this year’s Christmas silly season kicks off for me, and coming so soon after my return from Nigeria – with all the food I was force fed – part of me cringes at the thought of yet more food. In the end my desire to avoid giving yet more ammunition to the AJ-is-a-snob brigade makes me decide to attend. I just about make it to the party, keeping G waiting on the corner of Union and Bon-Accord for almost fifteen minutes. It is a terrible time to be out and about; it is piddling, there is a strong wind and Union Street is chock full of the rush hour traffic at just before six pm. In going home first, rather than directly from work, my gamble has failed spectacularly; missing the bus from across the road at home meaning I have to walk briskly to cover the twenty minute walk in fifteen. G – never the type to let an opportunity to lay in to someone – does give me a right going as we walk the short distance from the junction towards our final destination for the night after I arrive. It matters little that we are the first ones in by ten minutes past six, or that the table has been booked for a seven pm start.

We order gin and tonics whilst we wait for the rest of our party to show up. They do eventually, between ten and twenty minutes later. Our host, held up by a power cut due to the atrocious weather, arrives somewhere in between, waving us over to a private lounge which she had reserved for the purpose of drinks for an hour before dinner’s due at seven pm. Confusion resolved then. I grab my third gin and tonic of the night, joining in the yakking until we all sit down to dinner. Dinner for me is a fried calamari starter and a costolette di agnello for a main. The food takes a while to come through, being served in three or four batches. By the time we are all done, and several bottles of red wine later, it is very nearly ten pm, and home time for me. As I grab my coat, I overhear two of the guys talking about hitting Espionage. Loads of energy to expend yet.. O_o. 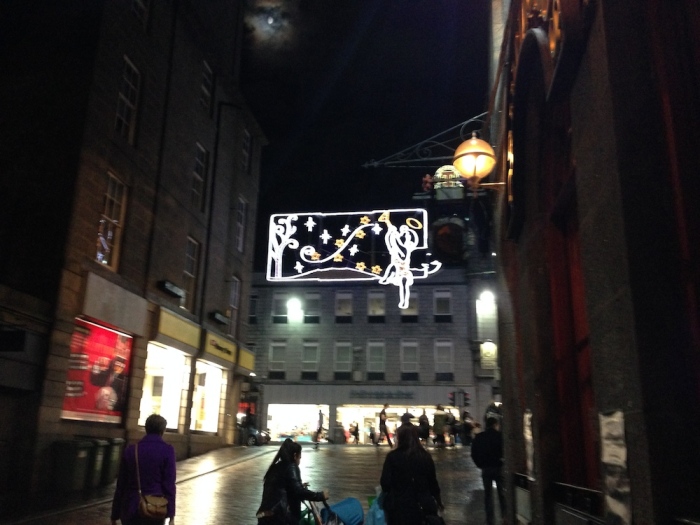 A week later, I am at the Monkey House for our now annual Christmas ritual – drinks, and then a large, hearty Indian meal at the Nazma. Walking up the road from the Monkey House, it all feels very Christmassy, the city lights above Union Street glowing bright against the dark skies as we walk along, all our personal niggles from work forgotten – for one night at least.

Parties #3 and 4 take place the Saturday after. The Tech team at church – choc full with very married people and their children – has us all out on the 14th to catch up on food, pepper soup and Nigerian music. It is slow going at first, like all things Nigerian with our penchant for African time, but it does start rocking two hours in. By then, we – our small group of single peeps camped out in our own little corner of the room- have made a few frantic calls to our contacts at the other party across town – and made up our minds to slip out quietly. We pile into U’s car just shy of 8.30pm and hop the three or so miles across.

When we pour in through the door at party #4, things are a little more raucous – blame shed loads of young people and too much food. I shake a few hands as I am ushered to a seat at the corner next to my friends R and P. A plate of rice, some coleslaw and fried chicken gets dumped in my lap in short order. My one surviving image from the party is me with the plate in my lap, shaping up a victory sign/ trying to prevent a picture of myself being taken. I clearly succeed at neither. Sometime later, S. waltzes in, making for a few awkward moments. Thankfully, we are off in a few – major danger averted.

Party #5 sees us return to the Albyn for my third straight year. The plan is to kick off with drinks for an hour before seating down to lunch and the raffle. G has had way too much to drink by the time the food arrives. That, and his form for being an inveterate windup, account for the extreme irritation I am feeling by the time we break up for the raffle. Between sips of cognac, gin and tonics and tomato soup, I get a book recommendation for 2014 – Vikram Seth’s A Suitable Boy. That, and the spicy haggis and beef I have as a main, more than make up for the evening. At the earliest opportunity, after my well documented rotten luck with raffles plays out yet again, I slip off to my house and some peace at last. 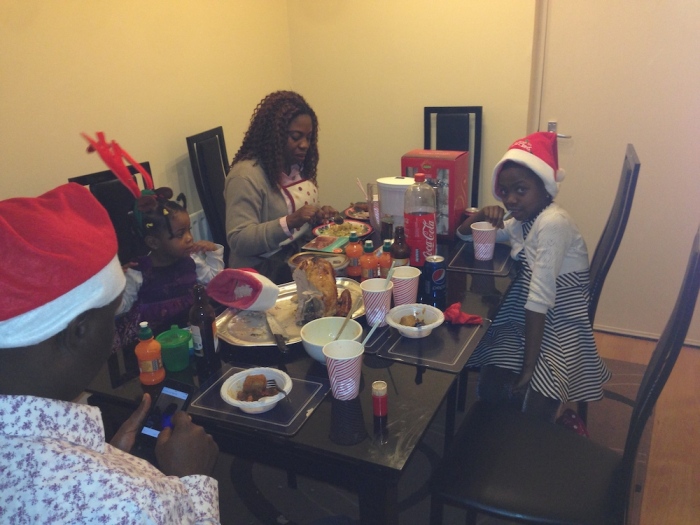 For the second year running, I get invited to my friend O’s house, which ends up being my sixth Christmas related event of the month. He drops by mine to pick me up after a not so quick Christmas morning service at church. The kids usually are the highlights of this one for me – I get to faff around and act like I am a big kid all over again. The youngest V and I have a tenuous relationship. She, as she has grown older, has become less trusting and icier towards strangers. By the time the evening ends, she and I are rolling all over the rug together, to her Mum’s surprise. Such is the strength of the bond that we have built by the end of the evening that she insists on accompanying us when her dad drops me off at mine. That and the bowl of soup, additional rice and turkey bits I get in a bag to take away,  make it a super Christmas for me. 🙂 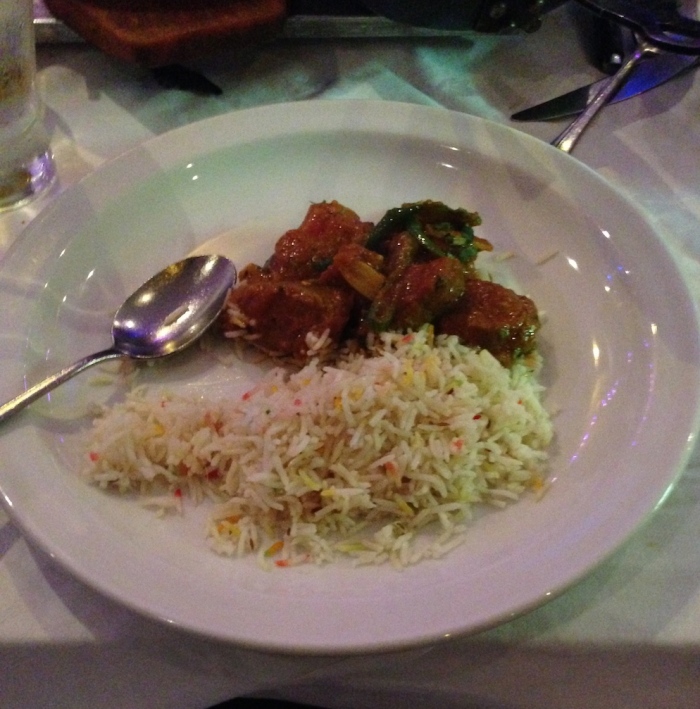 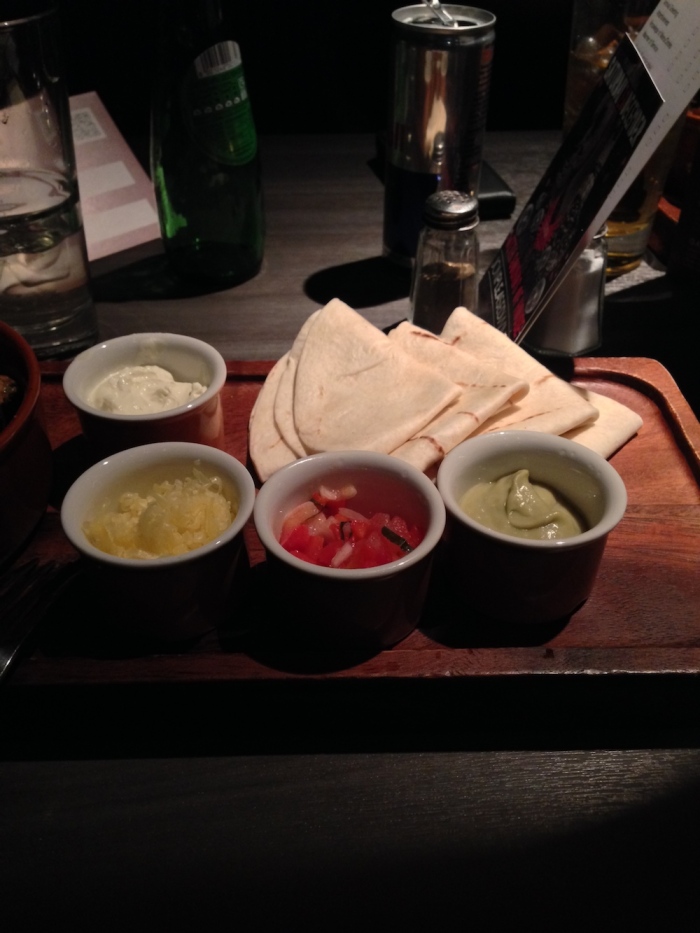 For a last Christmas do, my friend O and I head out to the Soul Bar on Union Street. Their chicken fahitas are the best I have had. And two or three times each year, I have gone back since my first time there in 2010. It is a quiet, guys only evening out. In another time and space, we would moan about our wives at this.. 🙂