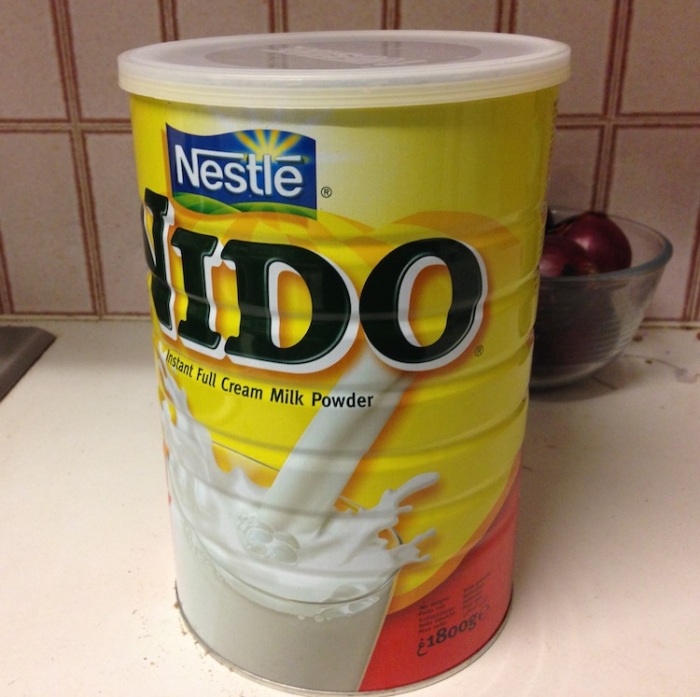 I am carefully arranging the items in my shopping basket to make room for the 1800g tin of milk I have just taken off the shelf when someone to my left blurts out – Brossss.. Your Nidoooo milk no get part 2 o!

So engaged in that most banal of tasks have I been that I have not noticed him until he has spoken, pretty much directly into my left ear, I might add. When I look up, his face has a vague familiarity to it. I give it a few seconds before I give up trying to place the face, and assume he is someone I have run into at church, or one of the multiplied baby birthdays I have been forced to attend this year. I smile and explain my thinking behind grabbing the big tin – I come to this African shop on the corner of George and Fraser’s only so often, and for what it’s worth I try to make it worth my while.

It must be nearly three months in fact since I last came this way – replacing garri with Irish potatoes and palm-oil laden egusi soup with steamed broccoli and chicken breast made the detour redundant – but today a feening for soft, squishy, bread washed down with the thick, delicious gooeyness of Nido milk, with just enough water to give it the consistency of ice cream – is what has won over my resolve, enticing me into showing up here.

When the young man on my left doesn’t move on after my explanation, I begin to suspect there is a little more to this meeting than just a casual comment.

You been dey Engine for UNIBEN abi?

I nod tentatively, still wondering where all this might lead. He breaks out into a broad grin as he explains he spent a year in my corner of the world, sharing jokes, bed-bug infested couches and the odd fiver for bread and groundnut in the Hall 3 common room, which I insisted on making my reading spot, bang in front of the TV.

I ask him what’s brought him into town. He explains he’s been interviewing for a role at one of the corrosion consultancies in town. I explain I work in the field these days, and share a few choice thoughts about the rife dysfunction in that organisation. He shrugs – Make dem take me first o. All these one na tori,  he says. Given the patchy job scene, I have to agree.

Very nearly four years since I moved up North, the ‘Deen hasn’t lost its ability to spring surprises in the shape of old, lost connections. And apparently even back in them UNIBEN days, I had a thing for Nido milk…

It is very nearly a month since I gave the #52SmallChanges project any kind of intentionality. I could blame a mini season of depression occasioned by my fixation on S,  or the fact that I have upcoming exams I am freaking out about, or work – which I have had loads of.

Bottom line is I haven’t been on the money with regards to the small changes I was meant to be progressing through till the next birthday. The barely there silver lining though is besides the ‘get more sleep’ change, I’ve pretty much kept up with the new habits I have picked up in the first three weeks.

So, this is me waking up again, rebooting; with change #4: Keep a food journal