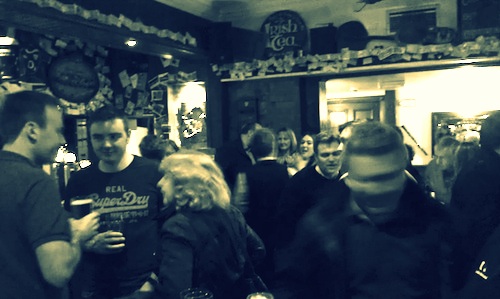 I caught my first whiff of light headedness half way through my second pint of Guinness Extra Cold – in all its frothy, 3.5 degree chilled gloriousness. The group from work – ever happy for an excuse to hit the town and splurge on the brew – had decided they were up for a second night out, a mere two months after our February jaunt, and that on a Wednesday evening no less.

We gathered at the Irish Malones bar; I arrived the small matter of five minutes before we were due to start to meet a sizeable number of people settled in, already downing a few tasters. There was no discernible pattern to how the group had aggregated, although it was clear the drilling and reservoir lads were having their usual love-in slightly to one side of the building, and the six or so ladies from Planning were chattering away excited at the other end.

I made my way to the bar and ordered my Guiness Extra Cold – wikipedia had promised it would be a very tolerable 4.3% ABV laced meal in a glass (a wee bit over my usual Becks fare, but I expected I would be able to handle it). A few sips into my drink, I caught the eye of my current work mentor, mid way through the very animated conversation he was having from his enviable position, sequestered between two buxom women. I went across, got introduced and proceeded to participate in the conversation, my participation being limited to interjecting now and again with oohs and ahhs at the colourful details of some altercation from a previous outing way before my time here.

Somewhere between downing my first pint and starting off my second, I was saved by the arrival of the finger food – an assortment of meatballs, fish fingers and spring rolls, with several sauces to choose from. I went for the compendium approach – having a little of everything to ensure I had sampled the lot. True to my insular, anti-social leanings, I flirted briefly with the thought of heading home early. There were mitigating circumstances this time though – my lightheadedness, and  the insistent growling of my hungry stomach – but the lure of watching the evening’s football (Real Madrid went on to lose on penalties at home to Bayern Munich) proved too strong. Thankfully, staying turned out to be the correct decision as the game provided enough of a talking point, and dragged on long enough to allow me dilute my alcohol with a diet coke.

I may have learned only one thing from this night out – I still have a ways to go to building my alcohol resistance. That, and the quip from my work mentor who insisted in mock horror at my choice of Guinness extra cold, that a true gentleman only drank gin-and-tonic.